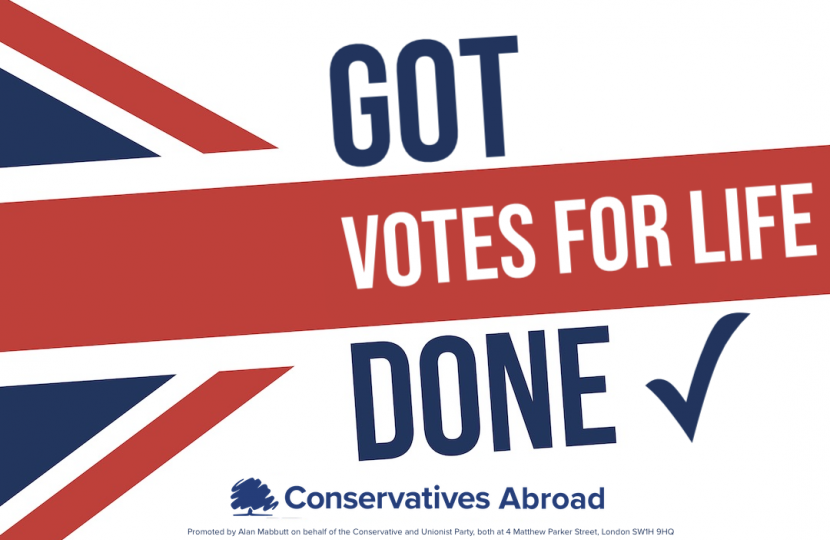 Millions of British citizens living abroad will today regain the right to vote in national elections as part of the Elections Act, which received Royal Assent today.

While most democracies allow all their citizens to vote in their national elections wherever they live in the world, Britons based overseas have been disenfranchised after Labour introduced an arbitrary 15 years of living outside the UK limit. British citizens working and living abroad are also banned from voting in the national elections of their country of residence. This new Act restores the democratic right to vote in UK General Elections to an estimated 2.3 million1 . Britons living abroad.

The measure has been a Conservative Manifesto commitment but opposition from Labour and Liberal Democrats has, until now, prevented legislation from passing through Parliament.

Heather Harper MBE, Chairman of Conservatives Abroad, which led the campaign to restore the franchise, welcomed the new legislation. “Millions of people living abroad, both working and retired, ranging from doctors and teachers to businesspeople in vital export sectors such as financial services and energy, have been prevented from exercising their democratic right to vote. This new legislation puts Britain back on a par with democracies such as the USA, France, Italy and New Zealand in recognising the importance of their citizens worldwide.”

History of the ‘Votes for Life’ campaign:- https://www.conservativesabroad.org/votes-for-life

Liam Fox visits Conservatives Abroad Dubai at the start of the new year.

The Rt. Hon. Dr Liam Fox MP started 2023 off with a visit to the Middle East with his work for the UK Abraham Accords Group and made time to meet up with the Conservatives Abroad Dubai group.